The Best Orlando Roller Coasters and Theme Park Orlando Rides are listed below.

Kraken Is Among the Best Orlando Roller Coasters 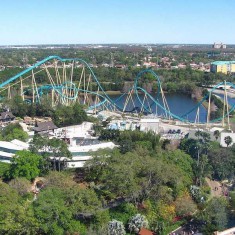 SeaWorld’s “Kraken” is an amazing Orlando Roller Coaster. Kraken builds anticipation, then lulls the rider to believe that the worst is over and then delivers an incredible thrill. Kraken starts with a slow and long climb to the top, which is at a height of 153 feet (47 meters). From the top the rollercoaster takes a small dip which ends in relief for the rider who believes that the worst is over. Then suddenly Kraken goes ballistic and offers one of the most exhilarating roller-coaster rides in Orlando. The drop is 144 feet (44 m). The 4,177 foot (1,273 m) long Kraken roller coaster has seven inversions and reaches a top speed of 65 miles per hour (105 Km/hr), making it the second fastest roller coaster in Orlando after SeaWorld’s Mako. What adds to the fun is that Kraken is a floor-less roller-coaster. Kraken is a large mystical sea creature thought to dwell in the Northern Seas of Europe. 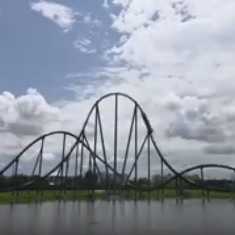 Mako is the longest (4760 feet or 1450 m), fastest (top speed of 73 mph or 117 Km/Hr) and tallest (200 feet or 61 m) of all Orlando Roller Coasters. The main features of Mako are two tall hills. The first hill is 200 ft (61m) from which the rollercoaster hurls down 200 feet at an angle of 70 degrees and at a speed of 73 mph. The second tall hill is 165 feet (50 m). In the evening Mako’s lights go on making it look amazing. Sea World’s “Mako” is named after the Shortfin Mako, which is the fastest shark in the world. With “Mako”, “Kraken” and “Manta”, SeaWorld Orlando is home to some of the best Orlando Roller Coasters. Mako would probably have been more exciting with a few inversions and loops. 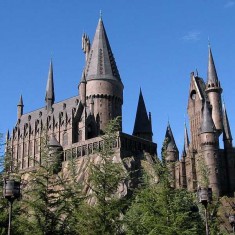 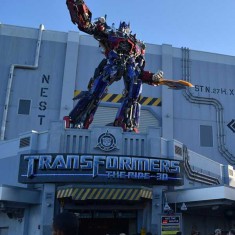 “Transformers: The Ride” is a 3D Dark Ride which simulates the sensation of being in the middle of a war between the good Autobots, led by Optimus Prime, and the villainous Decepticons, led by Megatron. The astonishing special effects of this ride are done by projecting 3D images on thirteen 60 feet (18 m) tall screens. The Transformer ride vehicles can be moved 360 degrees. Riders get the sensation that they are travelling at high speeds, falling down tall buildings and banging into things. During the course of the ride water is unexpectedly sprayed on riders. The use of hot air and fog add to the effect of the chaos all around. All these elements add up to make “Transformers: The Ride” an unforgettable experience. 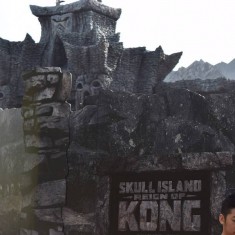 Skull Island: Reign of Kong is a thriling 3D Dark Ride at Orlando’s Island Of Adventure. Opened in July 2016, this ride is based on King Kong. With the use of an interesting plot, scary sets, elaborate structures, animatronic, props, live actors and sound effects, there is an attempt to keep guests entertained while they queue to board their truck. Suspense is effectivly built up as visitors queue up for this ride. This King Kong attraction designers have created one of the most engaging queuing experiences among Orlando theme parks. The ride starts with giant bats taking away Kate. Once the ride starts, Riders feel they are on King Kong’s Skull Island because of the engaging story, animatronic effects on their trucks, giant 3D projection screens on both sides, sound effects and 4D effects. Skull Island is among the longest Orlando Universal ride. 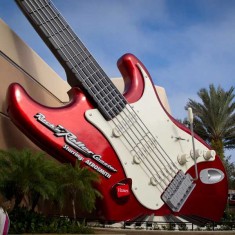 “Rock ‘n’ Roller Coaster” is an indoor roller coaster that accelerates from 0 to 57 mph (92 Km/Hr) in just 2.8 seconds. In the background there is loud, pounding music by Aerosmith. Each coaster car is shaped as a stretch limousine with 120 speakers blaring out Aerosmith songs. Each limo has a different Aerosmith song and the songs have been specially customized by Aerosmith for this rollercoaster. The theme of this roller coaster is that riders are driving through LA in a speeding limo to attend an Aerosmith concert. The lead up to the ride is a playful scene involving Aerosmith in the music studio. Fast speed, multiple inversions, engaging story line and amazing music by one of the Gods of Rock, all these factors help make Disney’s Rock ‘n’ Roller Coaster among the best Orlando Roller Coasters. In the view of this writer, “Rock ‘n’ Roller Coaster” is the only Disney Orlando roller coaster to make it to the top 10 list. 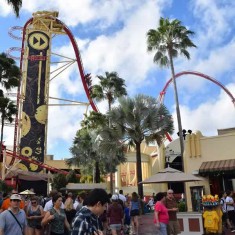 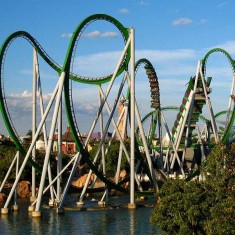 The start of the “The Incredible Hulk” roller coaster takes the riders breath away. In the first two seconds this roller-coaster accelerates from 0 to 40 mph (64 kmph). As the rollercoaster shoots out of the green launch tunnel it does a roll. In total there are 7 inversions. At one point the coaster car touches the water in the Universal Lagoon. The Incredible Hulk Roller Coaster was introduced in Island of Adventure (IOA) in 1999. The old Hulk roller coaster was dismantled in 2015 and a new Hulk roller coaster was opened to public in August 2016. The new green colored launch module, new aggressive looking vehicles with in-seat music system, new soundtrack and new lighting give a new freshness to this popular roller coaster.  In addition to the new infrastructure, there is also a new Hulk back-story before the rider is hurled out of the gamma-ray accelerator launch system.

Journey to Atlantis – One of Orlando’s Best Water Rides 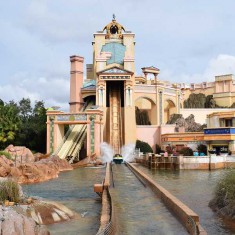 The main attraction of this water roller coaster is the long and steep 60 feet (18 m) drop in the end. At around 6 minutes, this is a long ride. All along anticipation builds up as riders approaches the final climatic drop. Unlike most roller coasters where the main thrill is in the start, “Journey to Atlantis” chief thrill is in the end. Sea World spectators too enjoy watching boats of riders plunge in the final drop, which ends in a large splash of water.

NOTE: Riders will get wet on Journey to Atlantis ride. 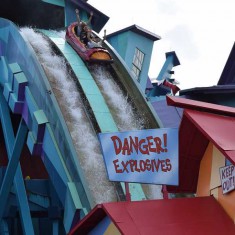 “Dudley Do-Right’s Ripsaw Falls” is an exciting log flume water ride. The climb in the water log to the top of the ride is very interesting. All around are characters from Dudley Do-Right from the “The Rocky and Bullwinkle Show”. There are two adrenaline pumping drops in this ride. In the second drop, logs plummet 75 feet and shoot out into the open into a splash pool. This log ride reaches speeds of 45 mph (72 Km/Hr). Riders will get wet. Being splashed with water on a hot Florida summer day adds to the charm of this ride.

NOTE: Riders will get wet on Dudley Do-Right’s Ripsaw Falls. 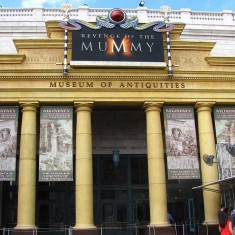 “Revenge of the Mummy” ride is an indoor roller coaster that is based on the “Mummy” movies. The main attraction of the Mummy ride is the story line and the wonderfully creepy Mummy set. The feeling of being inside an eerie Egyptian tomb is enhanced with the use of projection screens, deep mummy voices, dummies, fire, hot air, water spray, fog and darkness in the main roller-coaster chamber. The build up to the roller coaster docking bay is also great fun. There are references to the Mummy films, tombs, statues and more. Revenge of the Mummy roller-coasters is among the best indoor Roller Coasters in Orlando.

Doctor Doom’s Fearfall – Thrill Going Up and Coming Down 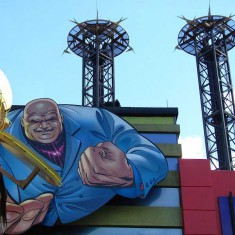 Doctor Doom’s Fearfall is a fear inducing vertical drop from a tall tower. Unlike most free-fall rides where the ride up is slow and the drop down is quick and fast, for “Doctor Doom’s Fearfall”, both the ride up and down are a rush of speed. According to the IOA website, the thrust during the upward launch is more than a 747 jet engine. Acceleration is faster than a space shuttle. Once on top riders are dropped vertically down at great speeds. This ride is not for the faint hearted. An added bonus for this ride is the lovely view from the top. Riders can choose from one of two 200 feet (61 m) high towers.

NOTE OF CAUTION: Riders must not have any loose items on them. IOA provides free lockers near the entrance of this rollercoaster. Security personnel are very strict on this point. It’s a long uphill walk to this attraction and its best to avoid having to do it twice.

The Skyscraper – Tallest Roller Coaster In The World

PLEASE NOTE: The selection of the Best Orlando Roller Coasters and Orlando Theme Park Rides is based on the personal views of this writer.

This is list of the theme park rides and roller coasters in Orlando. Rides in the Orlando Water Parks have not been included here.

IMAGE CREDIT: Please click on the images to view their attachment pages, which have information on the owners of these images.